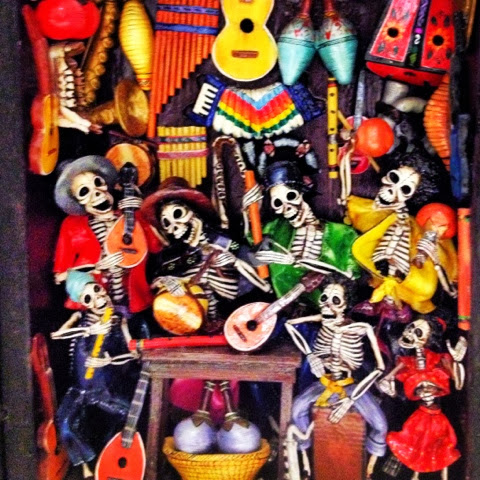 Well I will be hitting the Appalachian trail in about 2 weeks, but first I am gonna enjoy those two weeks in Puerto Vallarta relaxin' it up with my parents. We got here yesterday and it is more beautiful than I expected. A little tennis, followed by ping pong and swimming before lunch. A post lunch round of golf and now off to a fajita dinner...
Lucky Guy. 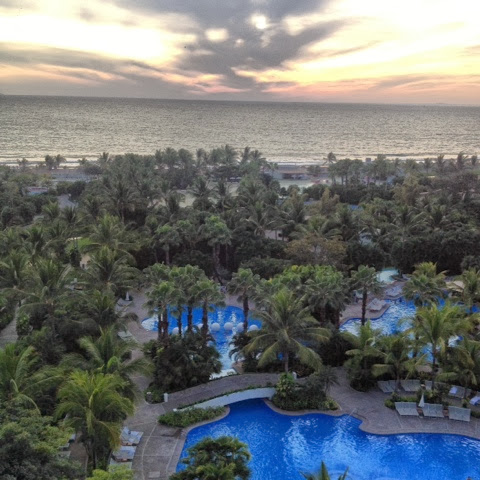 Posted by kristoHIKES at 5:00 PM No comments:

Hiking the Appalachian Trail this summer!!! 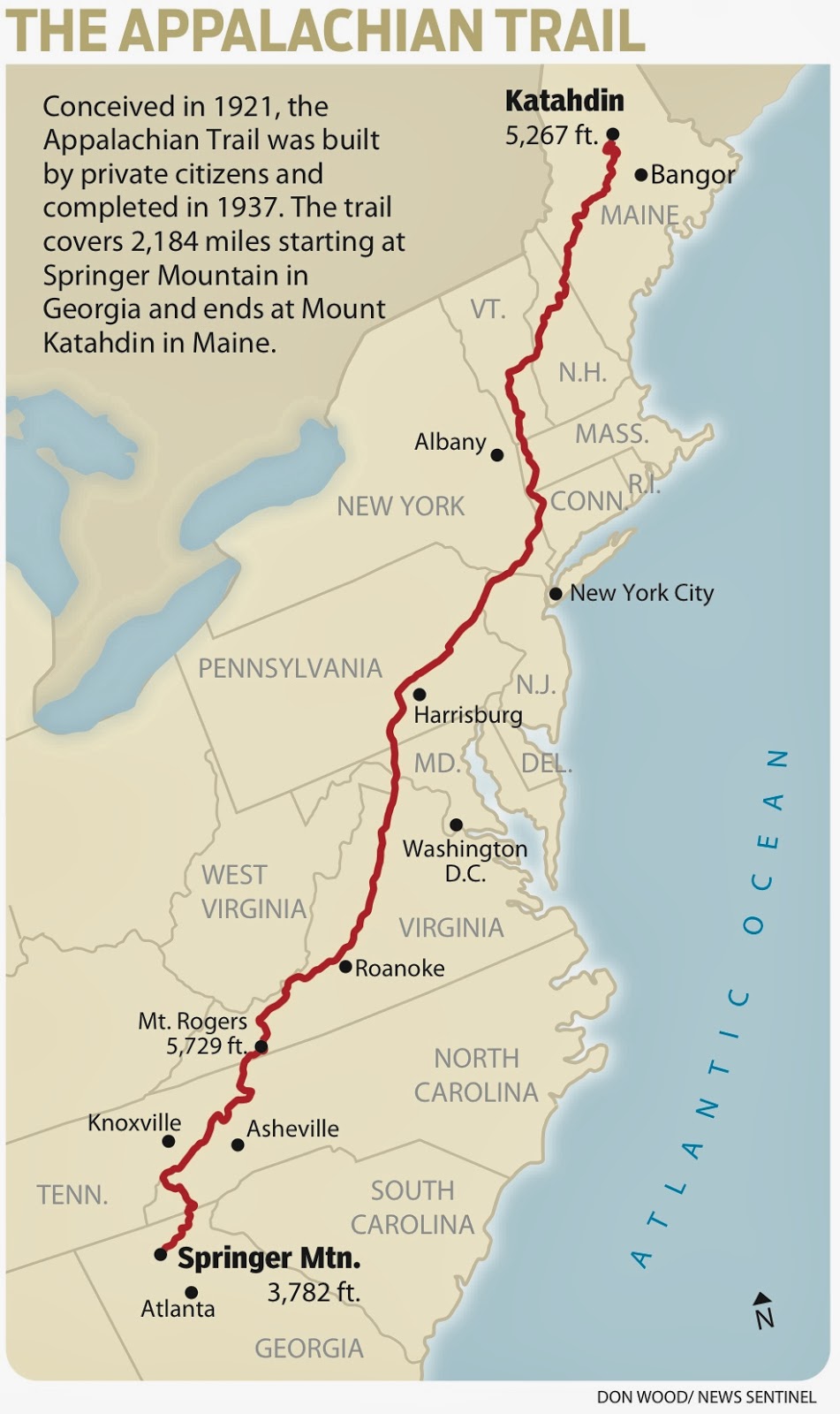 Well it's almost time! I am three days away from departing for Mexico, where I will spend a couple weeks relaxing in Puerto Vallarta, in preparation for my upcoming thru hike of the Appalachian Trail. That's right, another summer full of hiking. This time, my feet will get me up and over the 2200 mile Appalachian Trail that extends from Springer Mountain in Northern Georgia, along the spine of the Appalachian mountains through 14 different east coast states, ending atop Mt. Kathadin in Baxter State Park, Northern Maine.
Having lived on the West Coast my entire life, the AT will be something completley out of my element and I am looking forward to the challenges and experiences coming my way, whether it be the elements and weather, the crazy east-coasters, government shutdowns, I'll be out there hiking along with a motley crew of hikers. I will be joining a few buddies with whom I hiked with on the Pacific Crest Trail in 2012, and some other hikes since.
So keep on checking in, my plan is to hopefully keep an even better online account of my whereabouts and what my experience has been like throughout. I look forward to you all following along and if you have any questions, concerns, comments, please post them here or you can always reach me by email at kristoHIKES@gmail.com.

Posted by kristoHIKES at 12:39 PM No comments:

Well, I completed the SDTCT a few weeks ago....

It was so awesome, once again being surrounded by a group of avid hikers. It was another grand adventure no doubt.  Eight days of hiking, sweating, bonding, and stinking up the amazing geography that separates the Sultan Sea from the Pacific Ocean. The beginning and ending point of this 'trail' are something around 150-160 miles apart and some of the most amazing lands that Southern California has to offer. This trail is not completed in anyway and any route info you may find here, is a 'use at your own risk' type of scenario. We more or less linked up different trail systems with road walks, bushwhacks, and setting lots gps way points on Google Earth before starting. All the intel and route finding credit goes to my buddy Scrubrat, a native to the San Diego area who's great grandparents were early settlers in the SD region.


We started late on a Saturday, around 5:30pm at the Sultan Sea and beginning our skirt around the Ocotillo Badlands towards Borrego Springs, and hiking nearly 15 miles into the night before calling it for day 1. After day 2 of skirting the badlands and we made it into the town of Borrego Springs and proceeded to fuel up on greasy foods and a few cold beers. We stealth camped in the empty lot adjacent to the grocery store and had a 4500 ft elevation climb to start day 3. I awoke feeling pretty nauseous, and after a breakfast of biscuits and gravy, wasn't feeling much better. That climb nearly kicked my ass, i was hurting for a good portion of it, trying to drink more water than I needed just to stay hydrated in the unforgiving sun, even though the temps were in the mid 80's. The first 14 miles or so of the day were rough to say the least. Trying to make it up a huge mountain, with a group of 8, trying not to be the weak link, and slow the tribe down, i battled on. after dinner, and once it cooled, we hiked again well into the night, and i finished strong with my buddy Outlaw, hiking at a clip of around 4+ miles an hour to get to the water cache we had set for ourselves before we started. (We cached ourselves 10 gallons of water at 4 different locations before we started the trek.)

Day 4 was a beautiful day, and we were pretty much in the vicninty of the the Pacific Crest Trail all day. In fact, we were so close, Hippie Long Stockings and myself did a little detour off the trail to swing into Stagecoach RV and campground to get some snacks and goodies, then do a road walk to meet back up with the group. I stayed at the Stagecoach during my hike of the PCT in 2012, so it was pretty neat to go back to that place. We rendezvoused back at our 3rd water cache and started our climb up the 3000 foot climb that would put us at a great campsite, the intersection of the SDTCT and the PCT!! I haven't stood in that spot, since day 3 of my PCT adventure, and since then, I have hiked around 3000 miles. So awaking at that spot, with views of amazing mountains like San Jacinto, it was a moving experience, and one of the highlights of my whole trip.

Day 5 began with us making our way to Lake Cuyamaca, and then hitch hiking down into the town of Julian. Julian is regarded as one of the best little towns you can visit while hiking the PCT. In fact it is the first town you have access to and it will not disappoint. It is an amazing and rustic little town that will fill your bellies with good beer, amazing apple pie, and nice town folk. Just another gem in the PCT community. After a half day in town, we got a hitch back to Lake Cuyamaca, and then hiked into the night, down Engineer Rd for a 6 mile, downhill, paved road walk. I think everyone of us were hurting after that walk. Walking on pavement is pretty much the worst. Posting up as a group under a huge oak that is several hundred years old was a great place to stop for the night, it was situated on the Cal-Fire station land at the bottom of the canyon, we had a great spot to camp.
Leaving early the next day we made it to Cedar Creek Falls, aka Devil's Punchbowl, which is a huge waterfall that ended up being dry and not running. This led us down the trail to the mouth of the San Diego River, which comes from an aquifer and was dry as well. This led us further down  the valley into some Federal Native American Reservation of the Barona Tribe. Sovereign land. We certainly are not welcome to just pass freely. We found ourselves a few miles into their Reservation, and looking for water, we decided to take a dirt road as quickly as we could out of the reservation, up into a housing development where we could just ask some nice people for water. Which is exactly what happend. The first house we came across were understanding and let the entire crew fill up their bottles off their well water. We were able to get a ride that night from one of the guys who was hiking with us, his amazing girlfriend picked us up and escorted us around the next little section to save us from some unwelcoming bushwhack and canyon road walking that very easily could have led to death.

We started the 7th morning near Poway, finally making it into the outskirts of the northern San Diego area. after an early 10 miles, we made it to the Costco in Poway, to stink out the shoppers and feast on their budget menu of huge portion food. It was awesome. A huge slice of pizza and a hotdog, throw in a few cups of pop, and we were back on the trail meandering through San Diego, with all the onlookers wondering what 8 hikers in full packs were doing wandering through SD. We capped the night by hitting a bar that was 1/4 mile off the trail, then Mexican food, then stealth camping in Penasquitos Canyon to make our final push to the ocean on Saturday morning.


When we woke up on Saturday morning we were less than 10 miles from the finish. Once again, that sinking feeling that the trip is over consumes my mind. So excited to reach my goal, but equally bummed that now there is no more hiking to be had on this adventure.
Ending a hike at he ocean, however, is about the best way to do. Literally, you cant go any further, without a major fording of the ocean.....

We finished by all jumping in the ocean, even though it was late january, it was 85 degrees and beautfiul as could be at Torrey Pines Beach. A professional golf tournement was going on up the hill, so the Met Life blimp was flying around and the area was packed. It was such a great day.

All said and done, it was another amazing thru-hike experience, that left me wanting more.... I got sick. I threw up. I was cut over and over again by Cholla Cactus, and Agave, and a plethora of plants looking to keep you the hell away from them. I learned a ton about the land, the plants and wildlife. I am so thankful to be part of this community that keeps getting deeper and more loving.